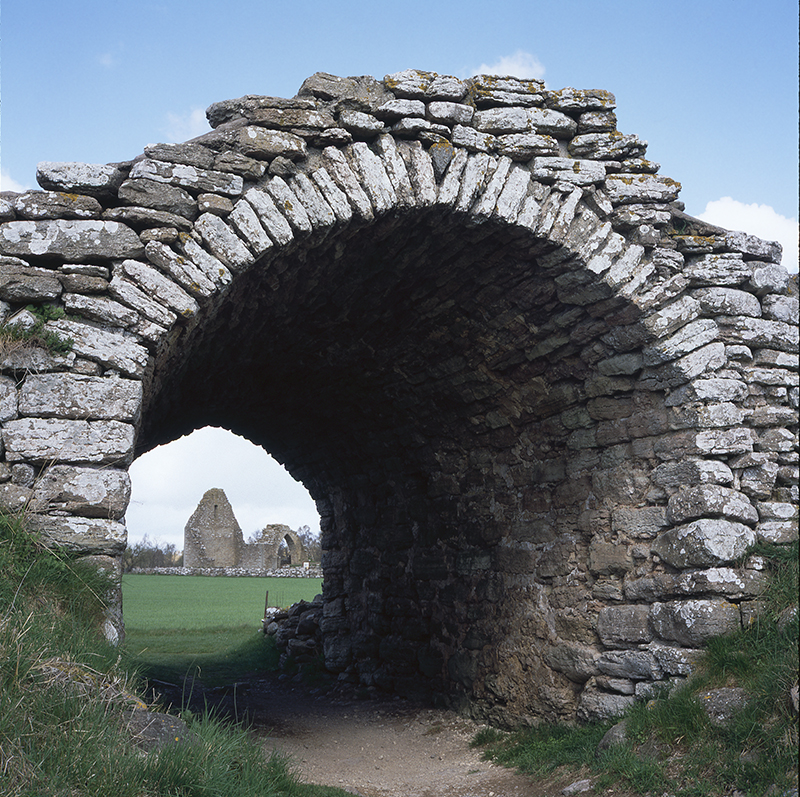 Borg is a farm in the parish of Algutsrum on Öland made up of two courtyard farmhouses and barns. It has the ruins of the medieval Chapel of St Knut and the island’s largest ancient monument, Gråborg. It is a place redolent of past generations and their lives on Öland.

The land in Borg is farmed traditionally, with cattle and sheep to keep the pastures open. Visitors can experience a living historic landscape by following the footpaths through species-rich pastures, hay meadows, and hazel coppices. The land is managed traditionally. The large hay meadow is especially beautiful in spring when carpeted with orchids.

The farm buildings date from the 1800s, but there has been a farm here for centuries. The way the farm is laid out is typical for Öland, with long, narrow plots and reed-thatched farm buildings built in a U backing onto the lane, and a farmhouse forming the fourth side. The farmyard is separated from the farmhouse courtyard by a low wall. The farm also has a smithy, a working windmill, and a shop.

The Academy acquired Borg in the 1940s to preserve and manage the site and open it to the public. At that stage most of the fields were abandoned and overgrown. The former field patterns were restored and the whole farm reinstated as a historic farming landscape.

Gråborg was originally a massive fortification, built in central Öland in around AD 300 and used throughout the turbulent times that followed until about AD 700. Its walls were 640 metres round and originally had several small gateways. Gråborg was in use again from the late 1100s to about 1300, probably as an administrative centre for central Öland. Its walls were built higher and thicker and it was given stone gate towers, of which the western gateway survives. Öland has many ancient fortifications, but only Gråborg has a surviving medieval gateway.

The ruins of the Chapel of St Knut, on the Gråborg side of Borg, consist of a nave, choir, and apse. The chapel was built in the late twelfth century and abandoned in the sixteenth century. A medieval altarpiece from the chapel is now in the church in Algutsrum. The chapel, which was dedicated to Canute, the patron saint of Denmark, was used by everyone living in Borg and Gråborg.

Open to visitors all year.

What to see and do

The ringfort of Gråborg and the ruins Chapel of St Knut, Borg’s meadowland, the middle pasture with its old meadow, the wildflower-rich wooded meadow used for hay, the old working smithy, and the windmill, a typical Öland post mill.

There is a grassy picnic area surrounded by birch and hazel.

There are two waymarked paths around Borg and its meadows. For a longer walk take the path to Jordtorpsåsen nature reserve (4 km), or the winding path to Ismantorp Fortress (16 km).

The shop has a carefully selected collection of handicrafts made using traditional methods, many locally produced, such as walnuts from Borg trees or the organic lambskins from the Hälsinge sheep that graze Borg’s pastures.