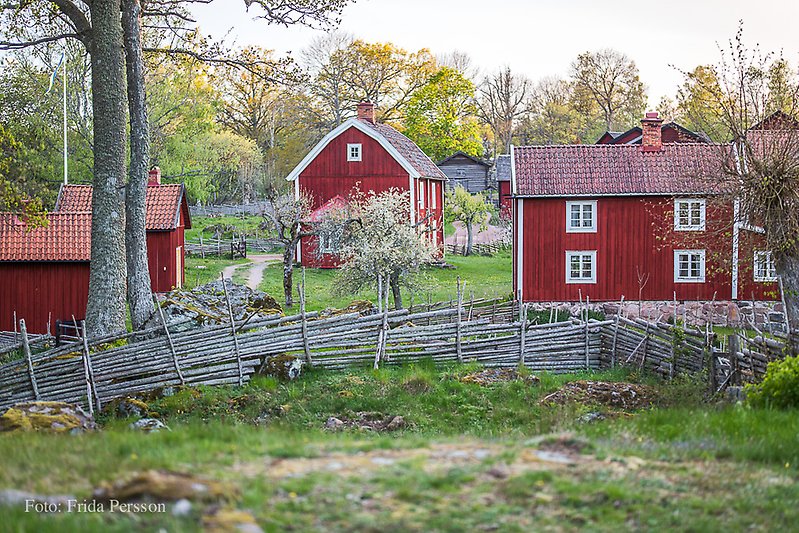 In Stensjö, farmhouses and barns are gathered in the hamlet in a pattern typical of this part of Sweden before the land enclosures of the late nineteenth century. Stensjö is a living landscape and, with its pollarded trees and species-rich meadows, has a rich biodiversity heritage. In 2020 the village was designated a heritage reserve, which will protect the future of the entire village, with all its buildings, fields, meadows, pastures, and woodlands.

As a heritage reserve, Stensjö will be protected by being farmed and managed in the traditional way. The landscape is the result of generations of work, clearing stones, growing crops, haymaking. Livestock have also left their mark by grazing the extensive pastures. This long tradition is behind Stensjö’s rich biodiversity and the many and varied habitats. Work continues to restore the older landscape to its state over a century ago. Farming and forestry are carried on year-round, and visitors to the heritage reserve in coming years will notice that Stensjö is continually changing. All the different habitats which existed in Stensjö in around 1900 will be restored. We have planted heirloom varieties of cereals and fruit trees and bushes, and there are endangered native breeds such as Swedish Red Polled cattle, Rya sheep, pigs, and hens.

Stensjö was originally the name of a farm first recorded in 1351. The earliest known spelling was Steenzöö. It probably took its name, literally ‘stone lake’, from the rocky hill east of the village, which must have seemed like an island, with the River Virån to the east and the expanse of marshy meadows to the west. The first map of Stensjö from 1709 shows just one farm where the village is now. Two centuries of partible inheritance left the farm an irregular cluster of buildings. By the late nineteenth century, there were five distantly related farmers living on what was originally the site of one farm. In 1883, there were 176 people living in Stensjö: yeomen farmers, tenant farmers, crofters, servants, farmhands, and paupers.

In the early twentieth century farming was less profitable, the village slowly emptied, and in 1951 the last farmer gave up. When Vitterhetsakademien acquired Stensjö in 1960 the buildings had fallen into disrepair and the fields, meadows, and pastures were overgrown. Over the years the buildings have been restored, the infields cleared of brush, the old arable land put to the plough, and the all-important traditional pole fences rebuilt. Vitterhetsakademien acquired Stensjö to save a traditional forest village in its original setting.

Stensjö was saved for future generations by a generous donation from Josef Anér in 1969, since when the village has been owned and managed by Vitterhetsakademien from Stockholm. Its holdings have gradually expanded so today Vitterhetsakademien owns 561 hectares, most of it forest. The old cluster village with its infields, pastures with grazing cattle, and winding gravel roads with miles of fences and stone walls, and all of it fringed by the vast Småland forest, gives a sense of ​​a bygone country life. Several scenes in Astrid Lindgren’s films about the Children of Noisy Village and Emil in Lönneberga were filmed in Stensjö.

Lake Stärringen a short walk away has a public bathing area.