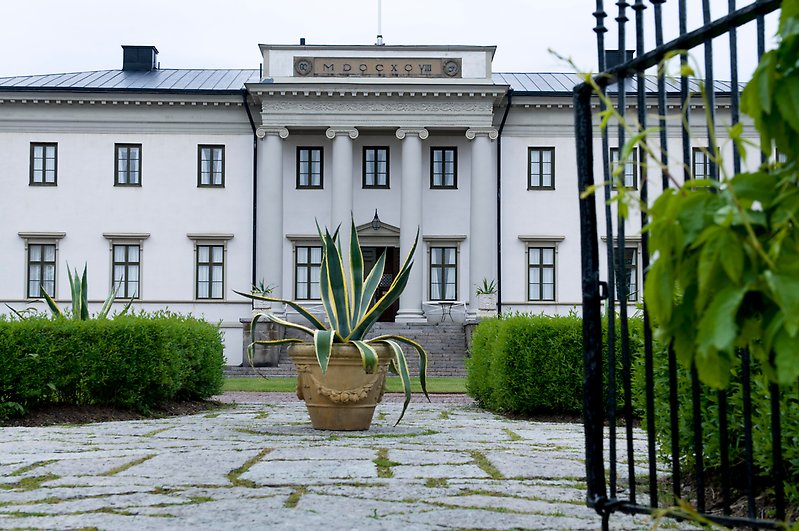 Stjernsund Castle stands on a headland at the north end of Lake Vättern in central Sweden. Built in a restrained neoclassical style, it has unusually well-preserved interiors from the 1850s when the royal family owned the castle. A guided tour of the castle takes about an hour. Follow it with a stroll in the tranquil park with beautiful views of the lake, or a bite to eat at the lakeside Castle Cafe. The gift shop sells a unique selection of souvenirs and replicas inspired by the Stjernsund.

The estate dates to the seventeenth century, when Johan Oxenstierna, son of the famous statesman, built a country house which was completed in 1664 and called Stjernsund after its owner. In 1785, a mill owner called Olof Burenstam bought the estate, and demolished the house to build a far more ambitious residence. Stjernsund Castle, with its clean lines, white plaster facades, and magnificent four-columned portico, was completed in 1808. The park was redesigned as an English landscape garden.

Between 1823 and 1860, Stjernsund was owned by the royal family, the House of Bernadotte. King Karl XIV Johan frequently stayed at the castle en route to the western half of his kingdom, Norway. His grandson Prince Gustaf, known in Sweden as the ‘Singer Prince’, had the castle redecorated in 1848–1852. Stjernsund still has some of the finest, best-documented interiors from the mid nineteenth century. Prince Gustaf died young and the castle went to his brother Prince August, who had one of the four wings, the Billiard Wing, decorated in a modern style.

In 1860, Stjernsund was sold to the Cassel family, who started a model farm, known for its cattle breeding and especially the Swedish Red-and-White breed (SRB). The last private owner, Augusta Cassel, died in 1951 and left the castle and its contents to Vitterhetsakademien. In 1965, Stjernsund Castle and its park were declared a listed building under what is now the Historic Environment Act.

The gift shop in the County Governor’s Wing sells a unique selection of souvenirs, gifts, and books, including replicas and other items inspired by Stjernsund Castle.

The Stables can be booked for conferences, lectures, concerts, or weddings. The venue can seat 100 or approximately 80 people seated at tables. Facilities include projection equipment of various kinds including a data projector.

A variety of menus and refreshments tailored to your requirements are available through the Castle Cafe.

Open for bookings from May to September.