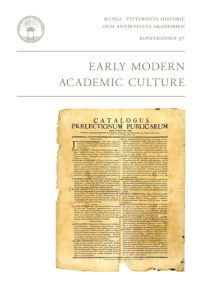 Traditionally, the Early Modern era is regarded as a down period in the history of universities, between their youthful prosperity in the Middle Ages and the idealist revival in the 19th century. Scholastic and classical tradition, religious orthodoxy, political control, and nepotism hampered progress and made science a concern for courts and academies. Recent research has modified that appraisal, but not done away with it. Nor is it the aim of this volume to challenge it. The majority of the contributions look into practices and habits in teaching, recruiting and scholarship, aiming at a deeper understanding of what is different from today rather than tracing the origins of modernity. However, there are two exceptions to this. One is Oxford and Cambridge, where, it is argued, the beginnings of the research university started in the humanities, the other is the involvement of the University of Leiden in the struggle for Dutch independence.