Richard Wagner. Werk und Wirkungen / His Works and their Impact. A Wagner Symposium 2013 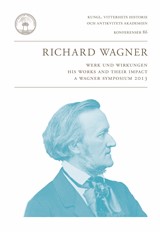 Richard Wagner. Werk und Wirkungen / His Works and their Impact. A Wagner Symposium 2013

The authors offer a wide variety of perspectives from different countries and several disciplines and focus on myth in Wagner, his female characters, his dramaturgy and his comic opera, as well as Wagner’s affinities with Bellini, with Hermann Levi, with Franz Liszt and with Thomas Mann. Modern anxieties about the effect of Wagner’s music on the human mind are discussed, as well as the staging and singing of Wagner in Sweden, his influence on Swedish opera composers, his presence in Swedish fiction, and how he is used for biographical identification.

The volume is illustrated with autographs, as well as photographs from the stage and private life. Wagner’s influence and inspiration on music, literature, and personal life is problematised.