Roman gold and the development of the early Germanic kingdoms 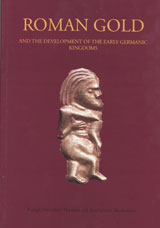 Roman gold and the development of the early Germanic kingdoms

The present volume represents the proceedings of an international symposium held in Stockholm on 14–16 November 1997. The symposium was divided into three sessions according to different themes all centred on gold: 1: Sources, exploitation and ownership. 2: Gold in the socio-economic network between Romans and Barbarians. 3: Reflections of political and religions ideology in golden jewellery. Seventeen papers were read in either English or German followed by discussions.This volume opens with an introductory article by Berta Stjernquist and the papers follow in the order in which they were given at the symposium, plus a summing up article by Ulf Näsman.