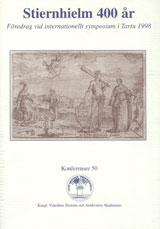 Georg Stiernhielm – known as the father of Swedish poetry – was born on the 7th of August 1598. His 400th birthday was celebrated at Sangaste Castle in southern Estonia on the 7th of August 1998. This birthday celebration marked the end of a three-day international and interdisciplinary symposium held at Tartu University, with more then one hundred participants. Tartu was earlier internationally better known as Dorpat, and when Stiernhielm worked here during several decades from 1630 onwards, it was the cultural and judicial center of Livonia (Livland). The king of Sweden had established both a court of appeal and a university in Dorpat.

In this report from the symposium Stiernhielm’s work has been scrutinized from most of the fields in which he was active: as an official in Estonia under Swedish rule, as a poet, as a scholar and as a scientist. Texts in Swedish, Danish, French and German with abstracts in English.