Sweden - Serbia and Europe. Periphery or Not? 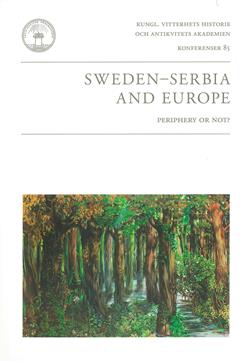 Sweden - Serbia and Europe. Periphery or Not?

This anthology collects papers and presentations given at the symposium “Sweden–Serbia and Europe. Periphery or not?“ It took place in Stockholm in November 2012 as part of a co-operation between the Royal Swedish Academy of Letters, History and Antiquities and the Serbian Academy of Sciences and Arts.

The theme “Periphery or not?“ refers to the spatial, cultural and political situation of the two countries in relation to what is often referred to as Central Europe, or with a slightly different definition and connotation, the Core Area of Europe. In many ways Serbia and Sweden represent very different cases of history, ethnic composition and neighbourly relations. But the two countries share certain problems of relating to the dominant centers of culture, economy and scholarship without losing their identity. A title used by one participant, “Sweden – the Reluctant European“, might well be used also for Serbia. The symposium’s theme was addressed from a number of different disciplines within the humanities and social sciences.

Thomas Lundén (ed.) is emeritus professor of Human Geography at Södertörn University College´s Centre for Baltic and East European Studies, of which he was Director 2005-06.