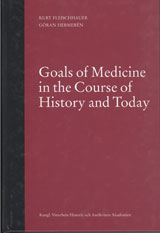 Some widely held beliefs about the goals of medicine are: we know what they are, they have always been the same, and they do not conflict with each other. In this book all these beliefs are questioned. It will be shown that when trying to achieve the ends of medicine at different times old goals have changed and new ones appeared. Between different medical goals tensions and clashes exist which may cause difficult ethical problems.

Kurt Fleischhauer is a medical doctor and emeritus professor of anatomy. From 1968 he was director of the Anatomical Institute of the University of Bonn. From 1985–1992 he was Rector of Bonn University.

Göran Hermerén is a philosopher and emeritus professor of medical ethics at Lund University, Sweden. He is currently President of the European Group on Ethics in Science and New Technologies, Brussels, and involved in several EU-funded research projects.